I have stumbled upon this article a few days ago, which outlines what it would take to develop an application like Instagram in terms of exact features and time & cost estimate: 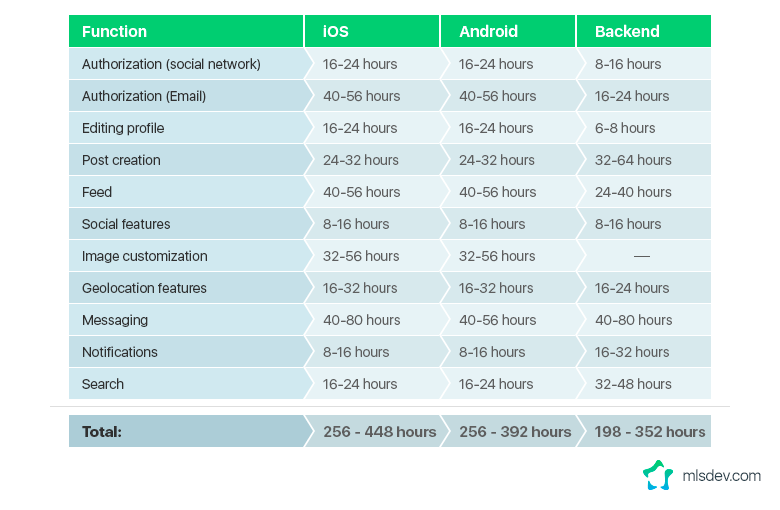 It also fails to account that Instagram also has a web app, which features everything the mobile apps do, sans photo upload. Which would add another $15k into the mix.

It seems bewildering to essentially re-implement the same UI and aesthetics three times, making your iterations slower and essentially increasing the cost by 2x.

In this case, the total cost for user-facing software would be about $55k… Imagine cutting that to $20-25k.

Hey, hybrid apps are there to help! You can implement almost all of your front-end once, and the only thing that will have to be written for every platform separately is stuff like the photo picker + filters. (Which, according to the breakdown above isn’t much in terms of time and cost.)

I have been helping a consultancy recently with a healthcare app that is used by several big brands you all know and love.

We have been able to continually deliver new features to both the website and mobile apps (iOS, Android, and Windows Phone!) pretty rapidly.

Since the website had to be responsive and look great on any device, wrapping that into a hybrid app was only natural.

The great thing about hybrid apps, however, is that they are not just webviews with your HTML and JS. They can take advantage of native platform features. And indeed, the app integrated pretty well with HealthKit and Touch ID, among other things.

Had we been forced to create, maintain, and iterate with website plus a native app for all of the 3 platforms, the development speed would be staggeringly slower, and the product would cost more to the client — with little to no added benefit.

Can it help in my case?

Now, the above obviously can’t hold true for all cases. There are trade-offs to be made, and in certain cases, hybrids simply won’t work. Here are several questions you can ask yourself to see if hybrid apps make sense for you.

But what about React Native?

It’s a great tool, and it allows to share a single code base between several platforms… but web isn’t one. If you also need a responsive website, a hybrid app can save you some, even compared with React Native, as RN will require implementing your existing web look-n-feel natively.